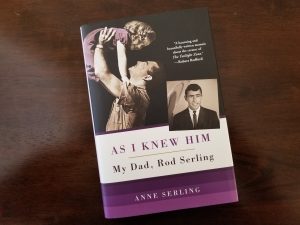 The pen of Rod Serling was on fire during television’s first and finest golden age. Serling crafted some of the most memorable and engaging live anthology dramas, while later going on to create, host and write for what is now recognized as a show that was far ahead of its time, “The Twilight Zone.” He was at the top of CBS’ Pantheon during the 1950s and early 1960s.

Curiously, The Twilight Zone may appear as nothing more than a black and white production full of aliens, shapeshifters, gremlins, time travelers, malevolent dolls, missing astronauts, and a list of memorable characters as far as the mind can imagine. After all, Mr. Serling both cautioned and tempted us with the opening lines of his now famous introduction to Season 1, “This is the dimension of imagination.” And imagine, he did. Yet, The Twilight Zone was never really about the trappings of science fiction or those overwrought narrative twists, it was about the folly of humankind, and the very nature of our existence. It was about the dreamers, the broken ones, those who wanted nothing more than to cry out against the isolation that irradiated an existential fallout in the United States following Hiroshima and Nagasaki. A cry that is sadly still echoed today. Indeed, it was Serling’s morality and his humanity that made the show so special, and why it continues to be a part of our social nomenclature in the 21st century.

Serling explored the darker side of humanity while understanding that it is in our humanness that we might find salvation. In the episode “Five Characters in Search of an Exit,” the character of the Army Major screams out, “Where are we? What are we? Who are we?” Yet, no one can answer his pleas. The characters are seemingly imprisoned in an absurd cylinder with no beginning and no end. However, as dreadful as that may sound, Serling in his traditional use of wit and irony turns the ending of this episode into a bittersweet reminder that we are all in this together.

Anne Serling’s new book “As I Knew Him: My Dad, Rod Serling,” is cut from that same cloth. A reminder that we are connected, no matter how clever we believe we are, no matter how far we ride on the wheels of technology, we are bound by the one thing we cannot escape, our call to be human. Not only is Ms. Serling’s book essential reading for fans of “The Twilight Zone,” it is a beautifully written memoir; a journey through grief by a young girl who lost her loving dad far too soon. What starts out as a tribute quickly develops into a story that is akin to therapy. Moreover, this is a book that I would and have strongly recommended to clients troubled with complicated grief and loss issues.

Ms. Serling paints for us an abstract of her father’s early years and his traumatic experiences in the Pacific theatre during the Second World War. She gently and quite lovingly reconciles the image of the man we all knew with the father she adored and who, in turn, adored her. This is a story told in snapshots. A glimpse of a man who exorcised his demons by creating memorable television while fostering a loving family life at their summer lake home in Ithaca, New York.

Not unlike the character of Martin Sloan in The Twilight Zone episode, “Walking Distance.” Ms. Serling presents us with a portrait of her father who is both successful and broken, longing for a life among the shadow of things that once were. Rod Serling’s closing narration in that episode illuminates his daughter’s prose:

“Martin Sloan, age thirty-six, vice-president in charge of media. Successful in most things but not in the one effort that all men try at some time in their lives—trying to go home again. And also like all men perhaps there’ll be an occasion, maybe a summer night sometime, when he’ll look up from what he’s doing and listen to the distant music of a calliope, and hear the voices and the laughter of the people and the places of his past. And perhaps across his mind there’ll flit a little errant wish, that a man might not have to become old, never outgrow the parks and the merry-go-rounds of his youth. And he’ll smile then too because he’ll know it is just an errant wish, some wisp of memory not too important really, some laughing ghosts that cross a man’s mind…”

As Rod once said, “Very little comment here.” These are the memories of Anne with her dad. There is a sense of sentimental nostalgia warmed by love and care, and we are given an opportunity to remember and grieve with Anne. A trip down memory lane, as it was and is now. A journey that reminds us that the “givens” of existence are never far from view.

Visit Ms. Serling’s website for more information or click here to purchase: As I Knew Him, My Dad Rod Serling.