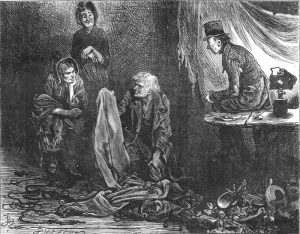 Scrooge. A word that can immediately conjure images of a bitter and heartless man concerned more with greed than humanity; a cultural archetype of someone wanting nothing further to do with his species and one who has no use for words like “compassion” or “care.” Yet, on closer examination, Scrooge’s story reveals some remarkable insights for our modern times. There are facets to his narrative that are ostensibly universal. Yes, a harsh commentary on the mores of his time, but Scrooge is more relevant today than ever.

On its surface, Dickens’ Victorian yarn can be simply read as “Being a Ghost Story of Christmas.” However, there is much at stake for our cultural and individual well being in this seasonal tale. In fact, I assert to you that Charles Dickens’ seminal 1843 work A Christmas Carol remains one of the finest examples of existential psychotherapy ever written (albeit in fictional form). The tale of Ebeneezer Scrooge opens a time and space for self-reflection for those who want to examine life in a meaningful and in-depth fashion. This is not about instant transformation for the client, positive psychology to sooth the therapist’s fears, or worse, wishful thinking from both parties. It is an existential crisis that is illuminated by one of the key tenets of psychotherapy – fear of death.

We all know the story, so it is here that I wish to briefly highlight the other side of Scrooge. No one arrives at a certain point in their development without a back story, and Scrooge’s history is one filled with disappointment and neglect. He is an ignored and isolated child, abandoned even at Christmas by his family and friends. Scrooge knows pain all too well at an early age. The world around him and its inhabitants are not to be trusted. People, above all, should be shunned. They are to be feared as they need and require emotional attachment and engagement. These qualities are easily dismissed by a young man whose growing trust in currency and greed will engulf his life for years.

In the beginning of A Christmas Carol, Scrooge exemplifies one of the central canons of existential depression and anxiety, that one has always been this way, and one always will be. There is a loss of agency and caustic determinism quickly fills in this void. When the Ghost of Christmas Yet to Come points at the tombstone, Scrooge understands for the first time that life can be written differently: what seems to be etched in stone isn’t. The specter’s message is powerful; an opportunity for Scrooge to see what life on earth would be like after his death. Scrooge observes his own forgotten corpse as his peers minimize his demise. He watches in horror as strangers quickly sell his belongings, while mocking his death with no regard or mercy. In death, he can no longer be an agent of change. He is a spectator to a cruel and vicious world he created.  Yet all Three Spirits show him that he was and is agent of change as long as he is alive. It is through an encounter with one’s mortality that a fuller life may occur – to know death is to know life. Scrooge accepts the significance of death, so that he may live his final months and years embraced in the richness of his relationships with others.

Death anxiety is real; despite those in modern psychology who often relegate the subject of death to the closet of “let’s not go there unless we have to” (even by some seasoned practitioners who should know better). In short, beware the therapist who professes that the exploration of death anxiety is not particularly helpful in therapy. Yes, therapists can spend far too much time focusing on one area while neglecting another. It happens. Not every therapist is well-rounded enough to create a new therapy for each of her or his clients. However, that shouldn’t allow for a wave of “positivity” to sweep us away from Otto Rank’s maxim, “Some refuse the loan of life to avoid the debt of death.” Exploration of death and dying serves as a profound catalyst toward some remarkable life changes. It is the confluence of both past, present and future; an investigation of life by way of an awareness and acknowledgement of our finite time here on Earth. In this way, we are all a reflection of Dicken’s vision.

Thus, A Christmas Carol calls us to embrace some definitive questions, “How would the world be different if I were to die today?” and “Do I ever have a true sense of how many lives I’ve touched?” Scrooge’s story may, in fact, provide the answers. Our relationships with others are so intrinsic that our absence creates an entirely different existence – a ghostly existential vacuum, if you will.

In the Victorian era, people saw ghosts and had premonitions. It was a system of supernatural beliefs that was not uncommon. Freud came along and said that this was the result of repressed memories. The dead were reduced to misleading or damaged recollections that resulted in certain beliefs and behaviors. Ghosts haunted the mind, not the house. Yet, there is something within Scrooge’s narrative that calls to us, pushes us beyond cause and effect, beyond determinism, and reminds us that we can be responsible and compassionate with our life choices and that no person is indeed an island.

Be well, and remember to keep the spirit of this season in your heart today and throughout the year. 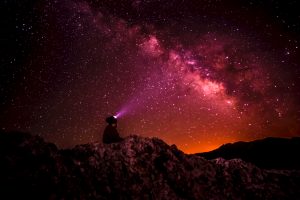 Nearly three years have passed since David Bowie abandoned this mortal coil at age 69, leaving a legacy of sound and vision that will likely never be equaled. He was a shining genius whose brilliance brought the world of music its first and finest chameleon in the forms of Ziggy Stardust, the Thin White Duke, and Aladdin Sane. Bowie is missed by all those who knew him personally and all those of legions of fans (myself included) who are left to remember him through his music.

Earlier this year, HBO premiered David Bowie: The Last Five Years this month. The documentary speaks volumes about the man’s life and his acceptance of death. But this article is only in part about Bowie. There have been more than enough eulogies, musings and opinions about the importance of his work that have sprung from far better sources and writers than this humble therapist. This article is more about what happened to him and what will happen to all of us. Bowie’s death, like that Prince’s just a few months later, presented us with a strange, but much needed phenomena. Suddenly the world of social media and pop culture was confronted with this question, “If David Bowie can die so will I, and if that’s the case, what does this all mean?”

As a professor who teaches existential psychotherapy and a therapist who holds all forms of art in the highest possible regard, I too find this question creeping into my thoughts in the wee hours of the night. Then I often find myself doing the numbers game, “Geez, he was only 69? That’s only 17 years older than I am now.”

As psychotherapist Irvin Yalom said, “Self-awareness is a supreme gift, a treasure as precious as life. This is what makes us human.”  Yet, there is a price to pay Charon long before we reach the river Styx. We are forever vulnerable to the wound of our own mortality. Our very existence is based on and forever shadowed by the knowledge that we will grow, blossom, diminish and then die.

Now there’s something to put on your next Christmas card.

Beware the fields of psychology and psychiatry if you are looking for any answers to the way you feel about meaning, death or despair. It is far better to steer your ship toward the open and didactic seas of philosophy, Fellow Travelers. Unless you wish to set course for a diagnostic code to explain away creativity, life and mortality, maybe even reduce your existence to a statistical inference? Yes, I often find myself biting the hand that feeds me, mostly because it serves a menu of junk science and reductionism that is one size fits all. Who sucked the air out of life? Maybe the human sciences didn’t, but we sure keep that vacuum going.

Could it be that we are but a brilliant light between two distinct points in time? We have a birth date and an expiration date yet to be determined.  Tombstones remind us of the quantity of one’s life. For Bowie, it was 1947-2016. However, that doesn’t say much about the quality. I suspect we should look more closely at the dash (-) in the above dates to fill in the blanks about one’s existence.  Some live well, others not so much, but we all die. It’s the time spent here (before we go to wherever your special place is beyond this world) that counts. Sure it may sound clichéd and trite, but you can’t escape the fact that you too will (depending on your age as you read this) expire within the next 50 – 20 years.

What are you prepared to do between now and then?

Acknowledging our mortality forces us to accept the loan of life, to paraphrase psychoanalyst Otto Rank (he’s dead too). The more we avoid the acceptance of death by shielding it with our specialness, the more we reject life. We begin to cower in the shadows, embracing the safer places to hide, as we whistle in the dark to the tune of death is something that happens, but not to me.

Yet, if we took a moment to look at our lives through a creative lens rather than a quantitative one, what would we see? For one, fear of death would hardly control our day-to-day decisions as much as we loosely admit it does now. What other questions might we want to ask? Perhaps, who wants to be the wealthiest person the cemetery? Can we begin to have an adult conversation about death in our culture before it’s too late? If death is how our story is going to end then what are we doing with the middle section of this book? Am I writing these chapters on my terms, with respect and responsibility to myself and others? What do I value on my life’s journey and how will I let my light shine?

So, just maybe, if David Bowie’s life and death meant anything it’s this: Ziggy Stardust was an extraterrestrial/existential rock star who came to earth, rocked out and tried to save the world through his music.

What will you do today?