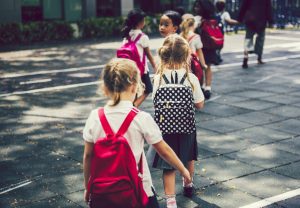 I don’t know if you remember the commercial or not, but years ago there used to be an ad on TV for back-to-school shopping.  It featured a parent literally dancing in the aisles as they threw notebooks, paper, and pencils in a shopping cart, kids trudging behind, as the song “It’s the Most Wonderful Time of the Year” played.

I love that commercial because I identify with it.  It is a wonderful time! When school starts, my kids actually get to learn things instead of spending hours on end bickering over toys or throwing dirt in each other’s faces! They’re happy hanging out with friends during recess instead of crying because their sibling pulled their hair or grabbed their toy or – and this is my personal favorite – their sibling’s foot has moved two inches onto their own couch cushion, and how can I be calm and well-behaved  because THEIR FOOT IS ON MY SPAAAAAAAAACE! MOOOOOOMMM!

It’s been a long summer.

But it’s over now, and the kids are in school, and cue the dancing! The twirling in the store aisles! And…the screaming? The tears over a changed routine? The afternoon meltdowns because things are different and it’s hard to get used to?

I had such a hard time transitioning into a new school year this year! New grades, new after school activities, new expectations for homework, new preschool for my daughter, and tons of paperwork sent me nearly into hot, frustrated tears every day.  How in the the world was I going to adjust? My kids seemed fine with it, but me? I was the mess. And then I realized why.

I’ve always had a hard time with transitions: moving to a new neighborhood, starting a new school, starting college, starting pretty much anything.  A new job would start a new world of worrying about my performance; a new addition to my routine would be really unsettling. And I’d get upset about the something new until I got used to it, which I eventually would.

But this year, I wasn’t as upset for as long as usual, and I figured out why.  Because I let myself feel it. I acknowledged that the first couple weeks of this new academic year were going to be tumultuous, and new, and went with that.  I let myself feel unhappy about it and did my best to power through, and here we are: about three weeks in, and I feel settled. I leaned into it, didn’t make myself “get over it faster,” and when I was able to breathe comfortably, I did.

If you’ve had children naturally, you’re familiar with the term “transition,” that short bit of time between the completely agonizing period of labor and the time when you’re ready to push that baby out.  It’s not the longest time of the labor process, but it’s the most painful. That in-between. If you’re in an in-between point in your life right now and you’re feeling that pain, know that something better is coming.  You will overcome whatever it is that you’re transitioning from and moving to a place you can – and will – get comfortable in. Lean into it as best you can, and when you’re able to, take a deep breath.