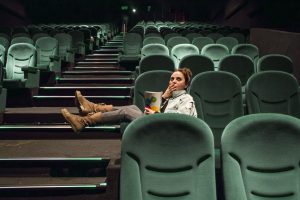 The editor of this blog approached me some time ago asking if I would be interested in writing an article about “ten movies that highlight existential motifs.” I know this because the assignment had been scrawled on a coffee stained notepad that often goes missing for weeks at a time. My handbag is a mysterious and often unforgiving portal to the unknown. Things appear, and then disappear. I recovered the pad last week as I desperately searched for my keys and, of course, I had missed the deadline.

To be honest, I had no idea where to begin with this article, which may account for the “lost” notepad. There are no accidents according to Freud, right? However, the editor insisted. So even after missing my first deadline, and in spite of my protests that this subject has been written about by far better connoisseurs of movie magic, I give you Aurora’s take on Five Movies that Highlight Existential Motifs. I know, it was supposed to be ten, but I’m a busy girl.

A bit of explanation is in order before we get started, and as this is not my area of expertise (if there could ever be one), my apologies if I am slightly off the mark. Existentialism is a term coined by 19th and 20th-century philosophers who believed that philosophical thinking begins and ends with the human subject. It is an analysis of human existence and the value and consequence of human choice. “Existence proceeds essence” with a Nietzsche-sized middle finger to any method designed to define humankind in a systematic or empirical way. Yeah, I know it’s complicated. In short, it is a philosophy concerned with finding meaning through free will, choice, and personal responsibility; a confrontation with existence by an exploration of death and meaning.

So, through the beauty of Netflix and Hulu I present you with my 5 flick picks; a sampling, if you will, with no intended spoilers. And in spite of the order they are listed, I wouldn’t consider one better than the other. All of them illustrate existential themes and are entertaining as well.

Remember that old Twilight Zone episode where reality is not what it seems and everyone but the main character is in on it? Okay, so that is just about every episode of the Twilight Zone, but if you get that then you’ll get the gist of The Truman Show. Starring Jim Carey (minus the usual shenanigans), Truman is a character that is both authentic and conflicted.

This film explores the idea that life has been a lie. Indeed, what happens when people who you thought were your family and friends turn out to be nothing more than actors employed to perform a role in a reality show that stars you? That’s the question posed by The Truman Show. What would you choose? Remain in a pristine world reminiscent of Main Street, USA or walk toward an unknown existence? Cue Rod Serling.

Yet, The Truman Show remains optimistic as many of its darker philosophical underpinnings are curbed by a love story tangled in the hero’s journey. Truman hints at some key concepts of existentialism such as questioning the meaning and purpose of life, personal responsibility and freedom to act, as well as stressing the significance of being with others.

From what I remember from my 8:00 am college philosophy class (Thanks, Dr. Nelson) Friedrich Nietzsche offered some fun thoughts about a term he coined as Eternal Recurrence. In a nutshell it goes like this; each one of us will live this life again, exactly as we are living it now. Sounds great, right? It’s a bit more complex than that, with many moving parts regarding time and a finite universe, but you get the idea. So Bill Murray stars in this witty and entertaining film that entwines Nietzsche’s term along with some basic déjà vu. Murray is a cynical and bored TV news reporter who is sent to cover what he considers to be a non-story. Under any other actor’s tutelage this would be a most pedestrian rom-com affair. Yet, Groundhog Day is far more than just another serving of comedy from an SNL alum.

The premise is Murray is destined to repeat the same benign day again and again. There is no escape from a calendar day that repeats itself ad nasueam. In the beginning he uses this knowledge to his advantage, but the novelty quickly wears off as he is confronted with the reality that he may be doomed to spend eternity doing the same thing(s), while watching the same events unfold in an endless point in time. Did I mention it’s a comedy? It is, and that’s where Murray shines in his typical deadpan way.

Groundhog Day wonderfully illustrates ideas in existentialism about time, choice, responsibility, isolation, death, and how we define meaning in our lives. In the end, it is an open and fun introduction to the philosophy of existentialism and how to grasp many of its loftier ideas.

This Japanese film takes on the sobering and always existential subject of death. Ikiru – which translates as ‘to live’ – tells the tale of an individual faced with his own mortality after hearing that he has cancer. Reflecting back on his life, Kanji Watanabe awakens to the fact that his life has amounted to nothing as he has spent it on the accumulation of things and work. He sees his life up to this point as senseless and void of meaning. Determined not to spend his final days in the same way, Watanabe finds meaning and a purpose before his death. Following his funeral, several of his work colleagues resolve to follow the same principles he ultimately found so fulfilling. Despite its age Ikiru’s message is as relevant today as it was in the 1950s. It’s a great primer for some major existential themes, such as being faced with death before learning to live and the search for meaning in a seemingly meaningless universe.

Our second entry in the death category and the Granddaddy of all things Kierkegaardian is Ingmar Bergman’s The Seventh Seal. Its iconic scene of death playing chess with a lone knight has been parodied in everything from The Simpsons to Bill and Ted’s Bogus Journey. Swedish filmmaker Bergman gives us as a dark fantasy wrapped in a metaphorical meeting with death. In a game of chess between a medieval knight and the human manifestation of death during the Black Plague in Europe, Bergman masterfully explores the answers to a lot of existential questions about life, death and the presence or absence of God. It’s not the feel good movie of the year, but it is clearly a benchmark for how film and philosophy can fuse as one.

In spite of what you may have heard 2001: A Space Odyssey is at its core a spiritual journey. Yes, it can at times seem exhausting and slow. Yes, it is visually stunning even by today’s bombastic CGI standards. Yet, it does something few films can do. It takes us along for a voyage that transcends theism, philosophy and agnosticism and squares both question and the answer on the shoulders of the audience. There are many Gods on display throughout this film; the ever loving God; the God of Tech; the God of Nihilism. Director and mad film genius Stanley Kubrick establishes how insignificant we are even with our technological advancements and gadgets. In the end, 2001 flashes us forward to face mortality and rebirth in the form of the iconic star child as Wagner’s Thus Spake Zarathustra reaches a fitting crescendo that will have you asking, “What just happened?” Ironically, a question that all of us might be asking the day we draw or final breaths.

So there you have it – Existentialism, indeed.

Please note: The opinions expressed in this blog are not necessarily the views of eTalkTherapy. Aurora Starr is a freelance writer, not a therapist, and her views, thoughts and opinions are her own. However, if you are easily offended then Aurora’s blog may not be for you.