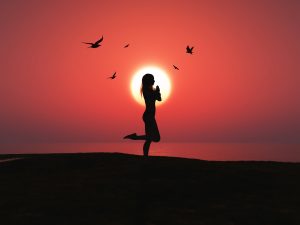 Let’s be clear. I am well aware of my name. It’s Aurora Starr and, yes, I live in California. My parents were and still are crystal-loving, chakra-checking, tribal-drumming, planet-charting, sage-burning, New Agers who own just about every Windham Hill collection ever produced. The irony of it all is not lost on me.

Yet, call it what you will, a striving to rebel against my parents or other authority figures, but more accurately perhaps a blatant indifference for those who claim there is more to a sunset than the beauty of a sunset. I believe in good science, philosophy, love, kittens, The Beatles, great sex and experiential learning. It’s complicated (but not really), as it should be. So to say I have a hard time relating with the New Age set is not far off the mark. Not that they are bad people. Quite the opposite, they mean well. They are productive and, for the most part, trustworthy. Just like some of my Christian and Buddhist friends and acquaintances, they want good things to come to those who believe, meditate, pray and do unto others, etc. These are also things that I can adhere to or even incorporate into my daily routine. So what’s the problem?

My friend’s New Age Train pulled out of the station a few years ago following her spiritual awakening. Since then, I have been exposed to lots of patchouli oil and other exotic scents from afar… lots. I quickly learned that my enchanted friend and her belongings will now and forever smell like some ancient temple in Upper Mesopotamia. Her very presence would probably remind you of Stevie Nicks’ public persona circa 1979, minus the Wild Turkey and cocaine.

I learned my first lesson in crystal ethics from her. NEVER, EVER, touch someone else’s crystal pendant (pendulum). You will strip the mineral of its magical cleansing powers. My friend recoiled in disbelief as I reached for her pendulum, “Oh, that’s so pretty.” Sounds benign, right?  I thought so, too, until I was quickly schooled in crystal etiquette.

It is imperative for you to believe that crystals are indeed magical and that they hold healing properties. She has crystals all throughout her apartment, so many, many pretty crystals.  Her ever expanding collection has made her life similar to Doris “the cat lady” who used to live above me. Oh Doris, good times. My friend makes me hold selected crystals (NEVER, EVER the pendulum) and asks me if I can feel their “life energy.” She insists that if I would “just relax, I would feel it.” I still don’t feel it, but I smile politely and repeat my original thought that they are certainly “pretty.” They can still be pretty, right?

Then it is time for us to go out for the evening. We had plans, but never mind this; the universe had plans for us, also. Our night out had become contingent on astrological charts. Somehow our friendship hinges on whether the tarot produces a death card or three swords or some other mystical combination. Consulting cards is not a way of planning a night of fun. It sounds like playing it safe and running away from personal responsibility. It is also akin to What Would Jesus Do? “He would have tacos, he would definitely have tacos. Now can we leave, please?”

So we finally arrive at a lovely, local eatery. A waifish and shy young girl takes our drink order and probably wishes she had been assigned to another section for that evening. She is immediately questioned by my friend about which menu items are vegetarian, gluten-free, lactose-free, and caffeine-free. I can’t say I blame my friend. Hey, being spiritually-aware often means you are body-aware. Healthy body, health mind, healthy spirit, I get it. Unfortunately, so does the timid waitress counting the minutes until her shift ends.

So to all my enlightened friends, and I have many of them (Remember the whole I live in California thing?), I wish you lots of peace and love, but you are not Native Americans, Aztecs, Mayans, Druids, or some Eastern Mystics. Different time, different history, different culture and different race. You live in Emory. You are white. Appropriating or picking rituals without having first-hand experience of the culture or the intended meaning behind those symbols is just wrong at best, disrespectful at worst.

You don’t own it. You never could. We can all agree that Eric Clapton is a kick-ass guitar player and a remarkable artist and performer, but is he a Blues Guitar God as many have suggested (including my Dad)? No, because he didn’t live it. He grew up in England for Christ Sake. Mr. Clapton did indeed experience his share of hardships – alcoholism, drug addiction and personal tragedy. However, he was never a Black musician in an oppressive and often brutal society ruled by an equally oppressive set of laws and government. See the difference?

There is a fine line between appropriation and appreciation. Mr. Clapton likely knows this, but I doubt many of his fans do. Now, this blog isn’t about a Black and White thing. That’s for another day, but do you get the point or is it just me, and how the hell did Eric Clapton get pulled into this?

My charmed friend also believes everything is a sign, and she’ll live her life following these psychic inklings, often against better judgment. She is indeed a handful, but I regularly cross the threshold into her world of magic and healing and genuinely enjoy our time together. There’s a place at the table for all, at least there should be. If her beliefs bother me so much, why don’t I just walk away? Well, that’s just rude and maybe, just maybe, the door to my mind needs to have its hinges oiled from time to time.

Please note: The opinions expressed in this blog are not necessarily the views of eTalkTherapy. Aurora Starr is a freelance writer, not a therapist, and her views, thoughts and opinions are her own. However, if you are easily offended then Aurora’s blog may not be for you.