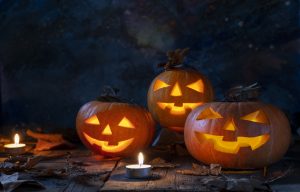 There are three things I have learned never to discuss with people: religion, politics, and the Great Pumpkin.” – Linus

As a child of the 1980s, TV played a pretty instrumental role in how I saw the passing of time, especially when it came to holiday specials. One of my family’s favorite TV specials in the Fall was “It’s the Great Pumpkin, Charlie Brown,” which would air every year – and thankfully still does! Every October we would sit down to watch Charlie Brown and the gang, laughing at Linus’ stricken expressions, Lucy’s hilariously ironic Halloween costume mask, Charlie Brown’s costume (and his Halloween “candy”), and Snoopy’s WWI-era adventure through the “French countryside.” Everything about it – Vince Guaraldi’s jaunty soundtrack, the animation, and even the beautiful watercolor-esque detail of the cartoon’s backgrounds – signaled to me as a kid that Fall was really, truly here.

Charlie Brown’s adventures, no matter which you choose (and there are plenty to choose from) have always focused on both the innocence – and brutality – of childhood, particularly in terms of bullying, of which Lucy is the ringleader and reigning champion. Usually, the victim is the hapless Charlie Brown, but this particular episode focuses on his best friend, the philosophical Linus, and his faith in a being called the Great Pumpkin. According to Linus, the Great Pumpkin rises from a pumpkin patch every Halloween, but not just any pumpkin patch – the one of a true believer, the “most sincere.”  Naturally, because no one else shares his belief, they mostly dismiss Linus as insane and treat him as such throughout most of the episode. The other kids go trick-or-treating and then to a Halloween party, making sure to stop by the patch to let Linus (and Charlie Brown’s sister, Sally, who decided to wait with him) know how much fun they’re missing.

But Linus perseveres, staying out in the pumpkin patch well into the night, needing to be escorted inside by his sister after the Great Pumpkin doesn’t show. The next morning when Charlie Brown, in an effort to commiserate with Linus, brings up how “he’s done stupid things too,” Linus explodes in indignation and doubles down on his resolve to make next year’s patch even better.

That resilience, along with the sheer tradition of the show, is a major reason why I think this special has resonated with so many people over the 50 years since it first aired. It speaks to all of our desires to get back up again after we’ve been knocked down. This is not the first year Linus has attempted to meet the Great Pumpkin; yet he continues to forswear his candy and treats (not to mention the constant ridicule) to greet him. Charlie Brown is told by Lucy, in no uncertain terms, that he was not invited to the Halloween party, yet he still overcomes his shame and attends anyway. What makes the Peanuts gang such a mainstay is that no matter how terrible and difficult life can be, we can still hope for greater things.

If you get the chance, make sure to catch “It’s the Great Pumpkin, Charlie Brown” when it comes around on TV this year. It’s great fun to watch, and will hopefully give your spirits a boost, too!